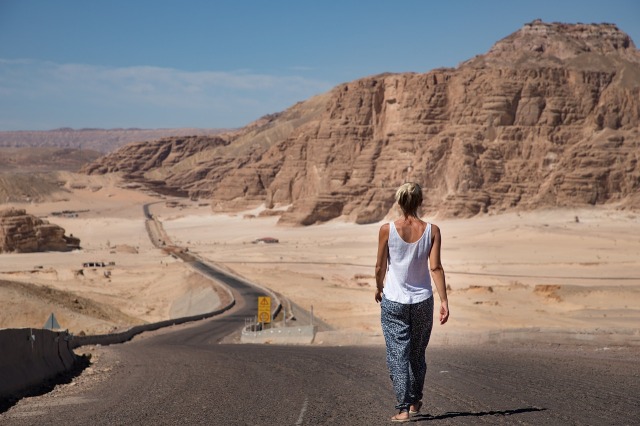 When the Red, Red Robin Goes Bob, Bob Bobbin’ Along

“Okay, listen. I’m just glad there’s reception out here and this thing is charged. Yes, I told him to go take a flying leap. Then I told him to drop me off somewhere. So he dropped me by the side of the road. No, I’m not in town, I’m down the road of someplace called Lugnut, Arizona. No, that’s not such a strange name; they used to have a town called Truth or Consequences. Yes, I’m in the desert. I’m okay, I’m on the highway. I’ve got a bottle of water. I just passed a sign, Lugnut is about five miles away. Yes, that’s where we drove out from. We stayed at their motel last night. Yes, they had bathrooms.

Why? Well, he’s a total schmuck! Honest to God I don’t know why I ever went out with him in the first place, let alone lived with him for a year and a half. And the last few months we were about as chummy as Regis Philbin and Kim-Joong-Whatsisname. And he expected me to do his laundry. I could tell because he left the dirty stuff there on the floor of my apartment. And that’s MY apartment! My name’s on the lease, my money pays the bills. What? Why was I out here with him? Well, I had to go to Phoenix, and you know I won’t fly and my car’s in the shop so we took his and we…well, it’s really not that bad a drive from L.A. to…Well, not if you drive fast. Anyway, when he gets back to the apartment he’s going to find his stuff outside, the locks changed and this big, burly…you remember Kitty Doyle’s brother? The wrestler? Yeah, him. He’ll find the wrestler and his stuff in front of the door. Outside. Yes, I’m kicking him out! I don’t think he’ll notice! Yeah!

Anyway, this town was founded by some guy who wanted to build a big diner with a car repair place right on the highway. Location, location, location, wasn’t that what we learned in business class? Well, anyway somebody started calling it Lugnut, even though he wanted to call it Oasis. Yeah, it’s all in this brochure we got at the motel. Hey, can you drive out and pick me up tomorrow? You’re in Rhode Island? Okay, I’ll call a cab. To L.A. Or take a bus. Yes, I can afford it but I’ll charge it to him, he’s got it coming! Yeah. Anyway, when I heard that…”