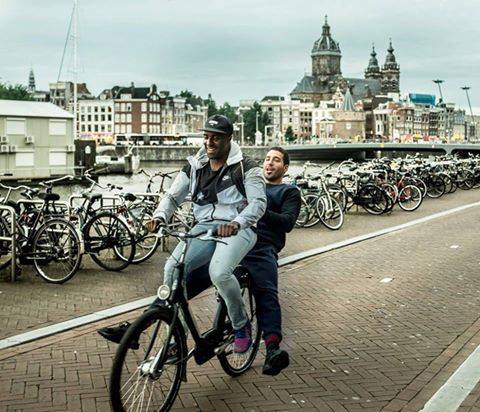 “Okay, if you’re an angel, how come you’ve got a bicycle instead of wings?”

“Angels are messengers,” the man at the front of the bike said. “Haven’t you ever heard of a bike messenger?”

They swerved to avoid the car stopped in the road. Stan held onto the back of the bike for dear life. He was wishing he hadn’t listened about a half hour ago when the man had shown up at his hotel, asked if this was room 243, asked if he was Stan Howard and told him he was an angel.

There was nothing angelic about the words the Angel spat out as he regained control of the bike.

“Pardon my French,” he said.

“We’re in Amsterdam,” Stan said. “And you told me this was urgent.”

“If you’re an angel why don’t you just OOOP!”

They hit a bump in the road. The Angel swore again.

“I don’t have a license to fly with passengers,” the Angel said glancing back with a grin.

“This is some kind of Amsterdam drug deal, isn’t it?” Stan asked. “I’m not into that. The only thing I ever…”

“The strongest thing you ever tried was weed; the last time was in College, January 23, 2006. That was at a party where you and Billy Mitzer went into the back room and made out.” The Angel slowed the bike to a stop. “But you really had a crush on Kev Sanchez and you never told anyone.”

“Billy is straight; he’s married with three kids and was so stoned he doesn’t even remember that night.”

“I’m an angel. I know things. Like your needing to be right here right now. And that my telling you I was an angel was the only thing I could say that would get you on the back of this bike.”

Stan had stepped off the bike when the Angel started pedaling away.

“Hey!” Stan yelled. The Angel looked back and called back at Stan.

“You might want to give Kev Sanchez a call.”

Stan thought about running after him, but instead turned and started walking back to the hotel.

The woman had been pounding on the door of room 243 for about five minutes when the door across the hall opened.

“He left about thirty minutes ago.”

“I saw her in the lobby a while back,” he said.

“Oh. Okay, thanks,” she said heading down the hall.

“Do you want a cup of coffee later?” he asked.

She stopped and turned. He was her age and there was something about him.

She smiled and walked down the hall.

She seemed nice, he thought as he watched her go. Who knows? Maybe they were destined to meet.

This entry was posted in Fiction, Monday Flash Fiction. Bookmark the permalink.