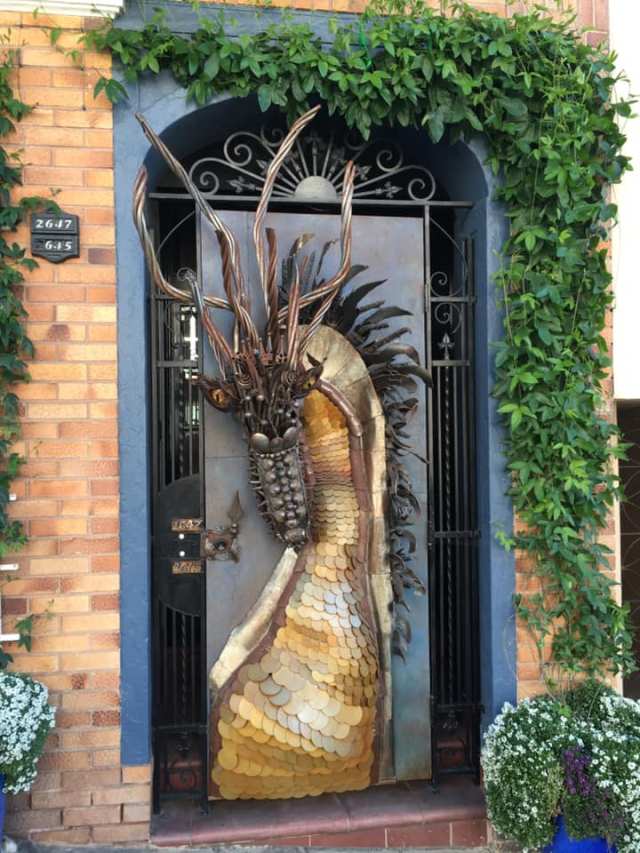 Doorway of the Dragon

I always had a thing for Asian guys. So when I met Alex at the sandwich bar, young, muscular and rocking out a tee-shirt, I started talking to him. Soon we were walking down the streets and he was showing me San Francisco.

“Yeah, most people don’t see the big opportunities here,” he was saying. “All I need is the cash for a start-up. Maybe we could talk about that after we get to my apartment?”

The day was clear, bright and not too warm. I grinned and said “Sure.”

“Take that door over there,” Alex said pointing at a house with an ornate metal dragon on the door. “Nobody would do that if they weren’t the kind of individualist who understands the value of an opportunity.”

I nodded and stared at the dragon. It was as tall as the door and looked as if it was going to crawl up the door to the roof. Alex was rambling on about money and opportunity.

Then, I heard a scream. Alex was lying on the ground, staring upward, terrified.

I stared. There was nothing there, just Alex on his back on the sidewalk.

“Help!” Alex yelled. “Get it off me! Don’t you see it? Don’t you…” Alex stopped. He stared at something right above his head as if he was listening to something. “No, no! Never! I won’t…I mean, yes! Yes!” He looked over at me in a barely-controlled panic. “All right, all right! I’m not Alex Wu, my name’s Jason Wong. I’m after that money your Aunt left you. I’ve been following you for two days.” He looked up into thin air again. “I pulled that job last month. Bilked an old lady out of twenty grand. Call the police. It says you have to call the police.”

“It,” Alex/Jason said. “The dragon that crawled off the door! Don’t you see it? Can’t you hear it?”

I took a few more steps away and glanced at the door. The metal dragon was still on the door. I pulled out my phone and called the police. While I was waiting for them to answer I glanced at Alex/Jason again. On the dirt next to the pavement where he was pinned by the imaginary dragon I saw a footprint suddenly form. A three toed footprint, like from a big lizard or a…a…

Someone answered the phone. I told the police all about Jason. They said they’d be right there. I hung up and then did a quick search about dragons. Among the things the article said was that dragons are guardians of treasure.

I must credit ‘Nathan Burgoine for the fine picture taken in San Francisco. ——-j.