Had a bit of trouble posting the picture prompt; Suffice to say it was a shot of a woman in a red outfit with a red hat topped by a red rose. So, I put my author photo up. 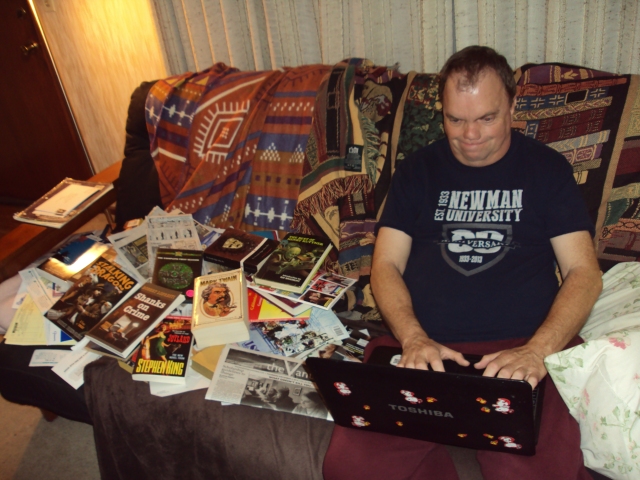 A Gentleman Dapper Stepped Out Of The Phone Booth

I knew the Lady in Red was trouble when she stepped into my office. Ladies in red are usually in trouble when they go see a private eye.

“I need your help,” she said. “My husband is cheating on me.”

“You want me to follow him or something?” I asked. “I really don’t do that sort of thing.”

“It’s more than that,” she said. “My husband is dead. Or, he’s supposed to be dead. He faked his own death. Six months ago. There was a car crash, fire, an explosion. And in his will he wanted to be cremated and have his ashes scattered. But if he’s still alive, it means we’re still married, and I have reason to believe he’s moved in with a woman. Do you have anything to drink?”

I had a bottle in my desk drawer but it was full of spare change.

“What exactly do you want me to do?” I asked.

“Mmmm maybe something like this,” she said. She leaned over my desk and pressed her full lips against mine. After at least a full minute, we pulled apart, both of us grinning.

“Thank you for finding my husband,” she said. “And happy anniversary.”

“What anniversary?” I asked.

“You moved into this office two years ago, remember?” she said with another grin.

“Oh, yeah, right…” I said. I’d been busy and it had slipped my mind. “Where did you get the outfit?” I asked, looking at the flowered red hat, the feathered red boa and the slinky red dress, oh that slinky red dress…

“This old thing? I hardly wear it anymore,” she said flicking the boa in the air. “Theater wardrobe room. I’ve done favors for them; they did this one for me.”

“I think I may close up early,” I said. The Lady in Red grinned again.

As we walked into the hallway, she was singing a tune I’d never heard before:

“Then a gentleman dapper

Stepped out of the…phone booth

“I don’t know,” she said, “but it’s the only other song I know that mentions a lady in red.”