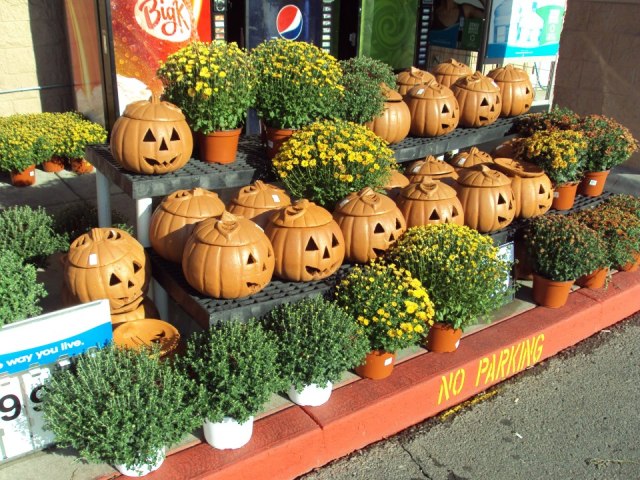 The small, tinny voice came out of the first ceramic pumpkin on the shelf outside the store.

“Hey! You guys okay? Azazott, you still there?”

“How about the rest of you?” Kozmoz asked.

“Ow! Just tired of bending around avoiding the sunlight!”

“Hey, how long we been in these things, anyway?”

“Since genius boy here thought it would be funny to pop out of these pumpkins and scare people!”

“Hey! Is it my fault I got the time wrong? Six in the morning, not six in the evening?”

“Yes, Ikonn, it’s your fault we’ve been in these things all day, ducking out of the direct sunlight, unable to pop back to the nether regions until after dusk.”

“And it was bad enough, and these things are facing where we got the sun all day through these pumpkin holes. Ever tried to bend under a sunbeam shaped like a smile?”

From under twenty ceramic pumpkins came a chorus of tinny voices saying “Yes!”

There was a tinny popping sound. A puff of purple smoke puffed out of the face of one of the pumpkins.

“Did he look out the eyeholes or something?”

“Or something. He was never the brains of the outfit.”

“I’ve been counting seconds. We probably have a couple more hours ‘till dusk.”

There was another popping sound and another puff of purple smoke.

“And be careful what you say,” Kozmoz said. “We’ve lost five of us already. Just hang on, shut up and stay out of the direct sunlight.”

“Joey, we have pumpkins at home,” his mother said. “Don’t touch those. Come along.”

“Joey, put that down before you break it.”

“There was a little purple man with horns, an, a tail and he just went poof and, and…”

“But Ma, it was like when I’m playing Mega-Monsters an I kick one of the little Gorbots an they blow up an…”

“And no more Mega-Monsters,” his Mother said, walking away.

“But Maaaaaa!” Joey said following her.

“Okay, that’s six,” Kozmoz said, when he was sure the humans were gone.