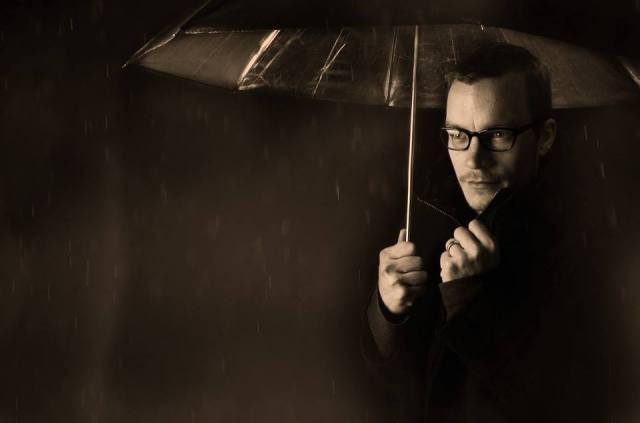 In The Night, In The Rain

“Would you, could you with a bagel? Would you, could you reading Nagel?” Cassie said grinning and holding up her blueberry slathered bagel. The two of them laughed sitting there in the mid-afternoon sun of the coffee shop. Jayce sipped his coffee and went on.

“I mean, honestly, I barely knew Uncle Karl. He was my Mom’s great-uncle and I only saw him once when we drove across state to that town in the mountains where he lived for a family wedding when I was, like, fifteen? Remember, I told you when I was going through my David Bowie phase? My hair was all, you know and I was in one of those suits that make you look skinnier? And that tie that looked like blue tinfoil?”

“It helped with the look that I was pretty pale,” Jayce said. “Well, I met Uncle Karl then. We drove all day and they had the wedding at about eight in the evening. He introduced himself at the reception and said he liked the look, especially the dark glasses. Oooooo! Girl, where did you get that eye shadow?”

“I was wondering when you’d notice,” Cassie said. One of the nice things about this relationship was they could trade makeup tips. Jayce went on.

“Anyway, Uncle Karl said he had to wear dark glasses too because his eyes were pretty sensitive to daylight, but he wasn’t wearing them then. Honestly, Girl, he looked pretty healthy and way too young to be a great uncle.” He took a big slurp of his coffee and Cassie grimaced. “Anyway, I asked Uncle Karl if the punch was spiked and he said ‘I never drink…punch.’ And then laughed like he’d made this big joke. And then I got asked to dance by this tall girl I didn’t know who she was but what the hey. And Mom and I stayed at the motel and went back home the next day.”

“So, why’d you go up for the funeral anyway?” Cassie asked. “I mean, you hardly knew the guy.”

“Ooooooo, that’s what I was wanting to tell you!” Jayce looked around the coffee shop and lowered his voice. “I had to go to the reading of the will. Uncle Karl left me, well Donnie and me,” he took a deep breath “twenty-thousand dollars!”

“I’m serious!” Jayce said. “Donnie squealed when I called him up and told him! He wished he could have gotten off work, but we’re taking that vacation to Hawaii now! Anyway, my cousin Brian got the real haul. A bundle of money but it came with having to live in that creepy old house of Uncle Karl’s that my Mom didn’t want to set foot in.” He picked up a bagel and started to munch on it. “He also inherited Uncle Karl’s business,” (munch-munch) “but I didn’t want any” (munch-munch) “part of that. Too dangerous. That’s what killed him.”

“I didn’t tell you?” Jayce said. “Oooo Girl, he was inspecting this warehouse he owned a few nights ago and this wooden pallet shattered and part of it impaled him right through the chest.”

“Me too,” Jayce said. “Oooooo! Remember my telling you about that cute little coffee shop we went into when Donnie had that conference in Toronto and we bummed around for a few days? This little town called Fuscha or something? They had the most…ooooo! Did you see the latest Will and Grace?”