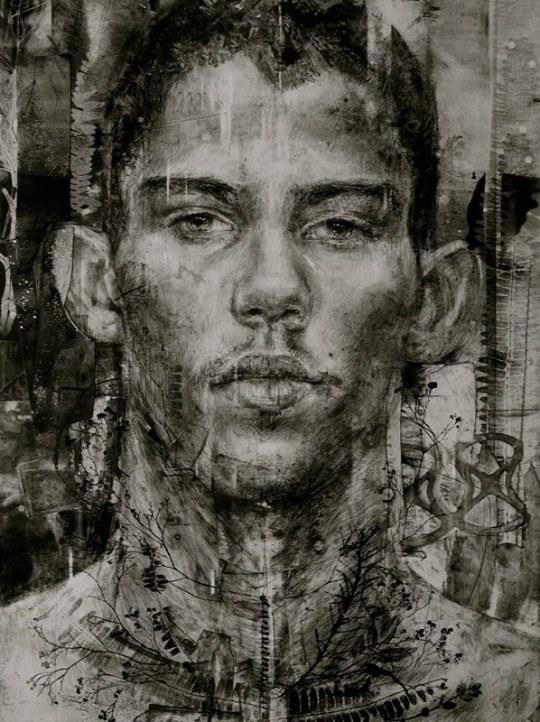 “Here’s why I wanted you to come here to the gallery today,” Ajuliano said.

“Wow!” Andy said, staring at the drawing on the wall. “Arrangement in Black and Grey; Latin Youth, 1926.”

“You’re not looking at the picture,” Ajuliano said, grinning and pointing a finger.

Andy stared back and forth between the drawing and Ajuliano. The face in the drawing was almost identical to Ajuliano, who Andy had backed up against. The taller man grinned and rubbed the shorter man’s arm.

“That’s you!” Andy said looking up at Ajuliano.

“Yeah, it is!” Ajuliano laughed. “No, I’m about sixty-five years too young to have been in that painting. I saw this when I was in the gallery a few weeks ago and I had to show somebody.”

“Think it’s one of your family?” Andy asked.

“Don’t know,” Ajuliano said. “I only know my Mom came from Chicago. I don’t go back any further. Not even sure I know who the artist is.”

“Raymond DuPass,” Andy read, squinting at the card by the painting.

Andy grinned and kissed him. “Careful, we’re in public!”

“So let’s stop being in public,” Ajuliano said grinning back. “My place is right near here.”

“We’ve known each other what, four hours?” Andy said.

“Yeah. Happy anniversary! Sure you want to be with an old man like me?”

“Hey, it’s my bus and you can…” Andy began, as they both started laughing again.

They kissed again and walked out of the gallery, the drawing staring after them.

It was later in the afternoon when a small group of art students wandered through the gallery.

“This one’s by Raymond DuPass,” a young man in the group said.

“Who’s he?” asked someone else.

“Raymond DuPass,” the young man began in a mock-serious tone. “American expatriate, One of the Barcelona School in the early Twentieth Century, relocated here to California.” The young man grinned. “And grew up where I was raised in Kansas City. Best known for his sculpture, his paintings and drawings are comparatively rare. He had an eye for male models whom he was rumored to dally with.” He laughed, and looked at the card again. “Wow. 1926. He died later that year. Probably right after he did this.”

“I dunno,” the young man said. “I read somewhere that he seemed to age overnight. Hey, they’re showing the Bernecky mural here!”

“You really get into this stuff, don’t you?”

“Yeah,” he said as they walked to the next room, the drawing staring silently from the wall.