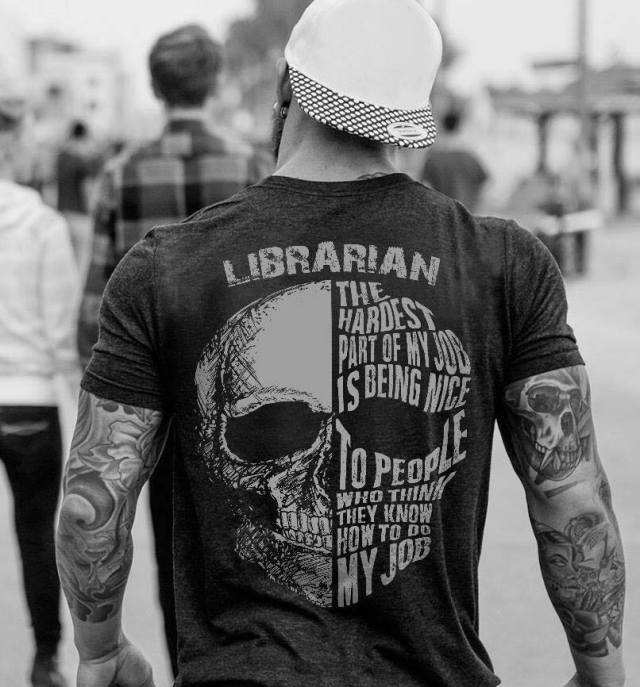 That led to a loud “Harrrumph” from the far end of the bar.

We called him the Coffee Man. Not to his face, but he was usually in Merle’s when we were, sitting at the bar and reading the paper over endless refills of coffee. He claimed to have been some kind of government agent and we had no reason to disbelieve him.

“Young people today doubtless don’t even see the life of a librarian as full of intrigue and adventure,” he said, “but I had an experience several years ago that belies all of that.”

It was just before I retired from the Company (the Coffee Man said) and I was attending a lecture at a public library. The speaker identified himself as the head librarian from a university I had never heard of and he said this made him an expert on his subject. That subject was; how libraries were now dangerous for children and they were sources of all sorts of inaccurate and politically slanted information. How these were not the libraries we had grown up with, and how the only recourse, unpleasant as it may be, was to shut down public and school libraries across the country.

I realize how this sounds, but he came off as charming and presented his argument in a rational way, backed-up with charts and graphs full of numbers which I doubted most of the people in the audience were following. The speaker was of the most dangerous type; able to convince his audience of the most preposterous assertions by virtue of his credentials. Finally, after his seemingly interminable presentation he opened up the floor for a Q and A.

Naturally, I was the only person who stood up.

My question was simple; I asked him if he’d ever been aware of practitioners of Library Science. (A gamble, I realize.)

He stared at me and then confidently stated that he wasn’t going to, as he put it, “bend to popular academic trends.”

That was when I asked him about his University background. He gave another glib answer and mentioned some degree in some form of theology. And that was when I suggested to the moderator that the speaker was not what he was presenting himself to be and they should ask him to leave. And they did.

“And,” the Coffee Man said, “As I’m sure you figured out why, I shall retire to my newspaper.”

The Coffee Man turned back to the paper he had spread out on the bar, waving for another refill of his coffee cup. Billy of course, was demanding an explanation.

“Okay, my Mom’s a school librarian, so I know what library science is, but he didn’t need a degree in it to be a real librarian. What made you think that guy wasn’t legit?”

“As you explained,” the Coffee Man said, “it isn’t necessary to have a degree in it to be a librarian, but this man was not able to explain that as well as you. The fact that he could not exposed him to me as a phony.”