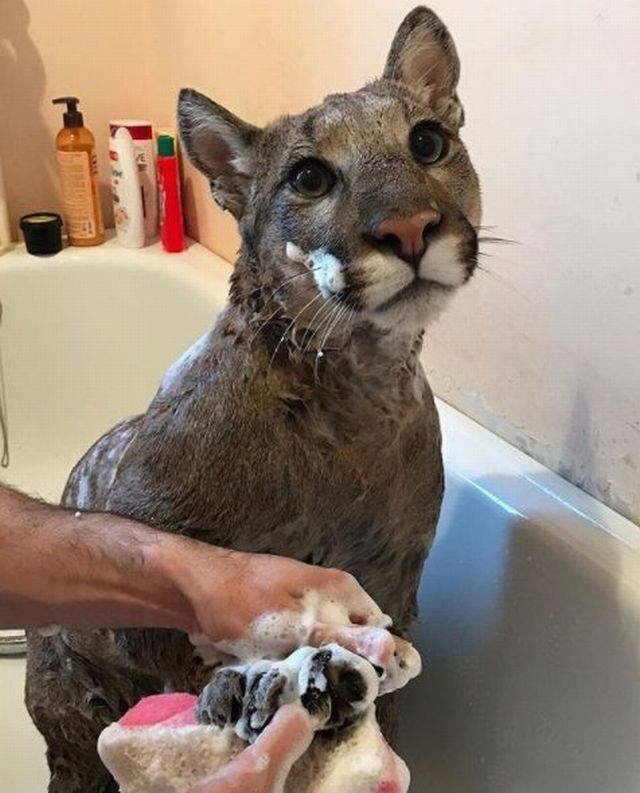 “I’ve never been a mountain lion before,” Marshall grumbled through furry lips. “Is this really necessary?”

“Yes!” I said emphatically. “You were starting to stink. How long are you going to stay this way?”

“Probably another eight hours or so,” Marshall said. “Unless we find a formula in one of those books.”

“Not likely,” I said. “We were lucky the one time we did. At least these transformations are only temporary.”

“At least when I turned myself into a crow I could fly,” Marshall said.

“At least when you were a crow we were out at the cabin, not here in the middle of the city,” I said, thankful for the thousandth time this apartment didn’t have a No Pets sign on the front door.

“You know,” I said, lathering up the big cat that I was now married to. “At least when you were a crow you could have used a birdbath.”

“Ick!” Marshall said. “Stinky, with dirty water and algae and you-don’t-wanna-know what kind of gunk on the bottom.”

He was right, I didn’t want to know.

“Got to admit,” I said, “you make a handsome mountain lion. Or cougar.”

Marshall grinned. “Thanks. I’ve never been called a cougar before. I thought we were about the same age!”

Bad joke but I laughed.

“Hey,” Marshall said, “wasn’t there an old episode of Bewitched where the guy got turned into something and his wife scrubbed him down in the bathtub?”

“Maybe,” I said, scrubbing Marshall’ back. “I never really watched it all that much.”

“Oh, and I’d better sack out on the floor tonight,” Marshall said. “Claws and teeth could rip the sheets or the mattress. Oh yeah! Right there! Scrub right there! Aaaaaaaahhhhh!”

In another instant, I was no longer scrubbing a mountain lion, but a tanned, dark-haired man who had nice arms but probably needed to cut down on drinking sodas,

“I dunno,” Marshall said. “I was kind of envisioning how it felt to be with you when I’m me and you were scrubbing me and I got really relaxed and wham! Back to normal!”

Yeah, life was crazy, but I wouldn’t have it any other way.

“Hold up on that!” Marshall said. “How about you keep scrubbing?”

I grinned and started soaping up the washrag.