Monday Flash Fiction for 10/9/17. Finding something in the woods… 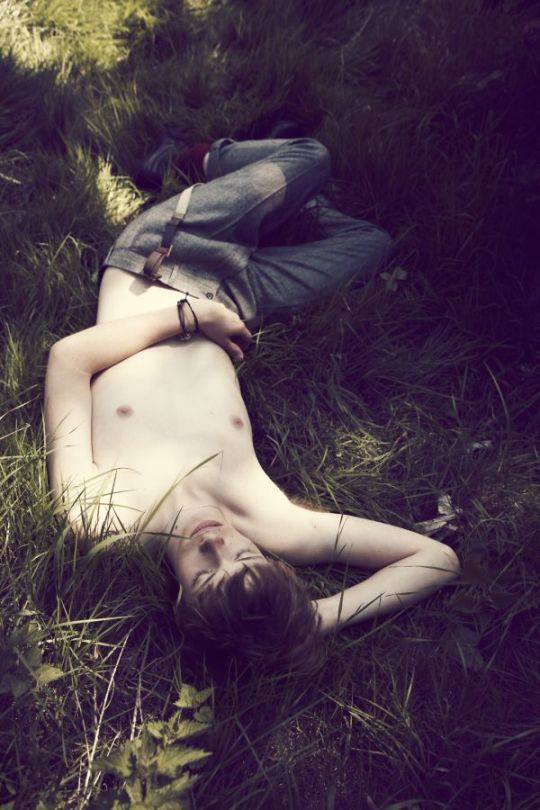 Love and Languish for His Sake

They stood there staring down at the boy lying on the forest floor.

“I found him right over here,” Pete said.

The two men were just about a mile from Chaz’s parents house. Chaz had taken Pete out to show where he used to play when he was a kid, living near a forest. They’d wandered around to see if they could find where Pete had tried to build a treehouse to see if any of it was still there. Then Chaz heard Pete hollering. He ran over to where Pete was standing.

On the ground was a young man, maybe eighteen, eyes closed, pale. No sign of breathing.

“No,” Chaz said. “I don’t think he’s dead.” Chaz was staring; there was something familiar about the figure, in his jeans, boots, suspenders at his sides, skinny body, feathery texture to the hair, lips that…He’d seen him before, he knew it. Chaz looked up at the sky through the trees, remembering. He’d even seen the knife at the kid’s belt before.

“Should we wake him up?” Pete asked.

Pete gave Chaz a glare that dripped of unspoken sarcasm.

“No,” Chaz said grinning and kissing Pete. “Not that. I mean a fairy. A fae. A spirit being. I think I saw him before. A long time ago.”

“How long ago?” Pete asked.

“I was about seven years old the last time I saw him,” Chaz said. “It was about twenty years ago. It was a summer afternoon and I was running through these woods and I saw him just lying there like he is now. I couldn’t take my eyes off him.” He let out a long breath of air. “I imagine I’d had feelings like that before but this was the first time I really consciously realized what I was feeling. I was drawn to him, but,” Chaz shook his head. “There was something unnatural about him. So I ran.”

“Did he chase after you?” Pete asked.

“No,” Chaz said. “I ran to my Grandfather’s. He lived near us back then, so I ran there, out of breath and tried to tell him I’d found a dead boy in the woods. Grandpa had me take him to where I’d found the boy on the ground and he wasn’t there. There was grass growing there and it didn’t look flattened like it would have been if someone had been lying there. My Grandfather looked at me and asked me to describe the boy. When I did, he told me that if I ever saw him again I was not to touch him or even go near him.”

Pete stared back at the young man on the forest floor.

“What I remember most vividly about that afternoon is the knife hanging from the boy’s belt.” Chaz pointed. “That same knife right there.”

Impulsively, Pete reached down for the knife. Chaz grabbed his hand and pulled him away.

“That’s something I read years later,” Chaz said. “If you partake of the food of the fairy folk, you become trapped in their world.”

Pete and Chaz stared down at the boy on the ground for a few minutes.

“Since when do you use words like partake?” Pete asked with a grin as they walked out of the woods.

Chaz grinned and squeezed his hand. “Since I get to walk back home with my husband.”

They did not look back at the forest.