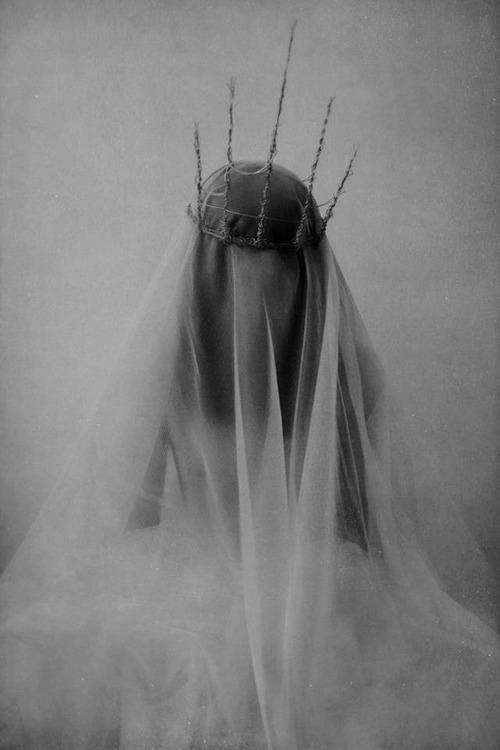 Author’s Note: This may owe a little to a story by E. Nesbit.

“You ever hear about the Devil’s Bride?” Burt asked.

“Yeah?” Colin said, cracking open another beer and looking up at the stars.

“There was this girl,” Burt said. “Her father was a rich landowner who wanted to get richer, so he betrothed his daughter to a Prince From Across the Sea.”

“And?” Colin asked. This was getting good.

“The Prince showed up,” Burt said. “He was handsome, charming and threw gold around like it was dandruff. He and his new fiancée decided to get married at her father’s estate. But then the bride-to-be started to get a bad feeling about the whole thing.”

“How so?” Colin said, sipping his beer.

“The prospective groom made some changes to the ceremony. He intended to perform the ceremony himself; he wanted the bride to wear a wedding gown of his own design, a design which included being draped with a mourning veil with a crown of steel spikes. And, instead of rice, he wanted everyone to toss pinches of dirt he said were from an unconsecrated burial ground in Europe.”

“The bride pulled out of the wedding…” Burt said.

“…but the story is, you still see her wandering through these woods in her gown searching…for…her…lost…groom!” Burt’s voice had gotten creepy with a cackle. “Of course, I never believed that part,” he said in a normal voice. “After all if she didn’t want to marry this Prince 250 years ago she probably wouldn’t change her mind.”

The wind began to whip up.

“It’s the groom you have to feel sorry for,” Burt said.

“How so?” Colin said finishing his beer.

A mist began to creep across the ground.

“The Prince was the one who got dumped,” Burt said.

It was beginning to get cooler.

A distant bell began to toll.

Colin looked up; there were no clouds but the stars were somehow gone. Burt towered over him, the fog wrapping around him like a veil, a shadowy tower of spikes crowning his head.

Colin dropped his beer, his jaw slack as Burt reached towards him, a low voice emanating from where his face had been.

“After all, there are many ways to find a bride…”