Something Tempting for Monday Flash Fics, May 29, 2017

The Slanderer (the name he was using that week) stalked through the cavern, lit by the glow from the fires.

“This one, Master?” Mara said, cradling an ornate violin embedded in the rock floor.

“No, he hissed. “That one is chained. And it was specially made. Look there. Kubelsky.”

“No! Inscribed on the fingerboard! It was supposed to be his! I went to see him; I offered him music, his heart’s desire.” The Slanderer’s face darkened and so did the cavern. “He laughed at me! Sent me away from that shabby hotel room! And I was left with another instrument that would work its wonders for only one person!”

The Slanderer spat on the ground. It sizzled when it landed and left a mark on the stone floor.

Mara looked around. There were violins, bass fiddles, guitars, trumpets embedded in rocks. Some of them chained where they were. But there were also spaces where instruments had once been. At the end of the cavern was a section of empty spaces and a few electric guitars standing upright out of the rock. Beside it was a long section full of electric bass guitars.

“Music is a wonder,” the Slanderer said as they walked through the cavern. “It can inspire but it can also entice, which makes it a useful tool for me.” He glanced at a small hill of rock surmounted by a golden lyre. “I might have realized I wasted my time making that one. When I offered it to him, he used the same sling he had killed…ah, here we are.”

Just past a lot filled with tubas and a near-empty plot with one or two saxophones standing out of the ground was a large tract of land with a miscellany of instruments, some chained to the ground, some not.

“There,” said the Slanderer, pointing. “The one in the far corner. Bring it here.”

Mara nimbly rushed over to the instrument, careful not to trip over a row of piccolos protruding from the ground. She grasped the instrument with both hands and pulled. It reminded her of a large guitar with a rounded body. She carried it out of the lot and presented it to the Slanderer.

“Ah, yes,” he said with a sulphurous grin as he fingered the instrument. “This will be perfect. It will be bait, the lure, the instrument, if you will, of its intended recipient’s destruction.”

And he and Mara began to laugh, their laughter filling the cavern, reverberating off the stringed instruments, creating a noise that almost sounded like weeping. 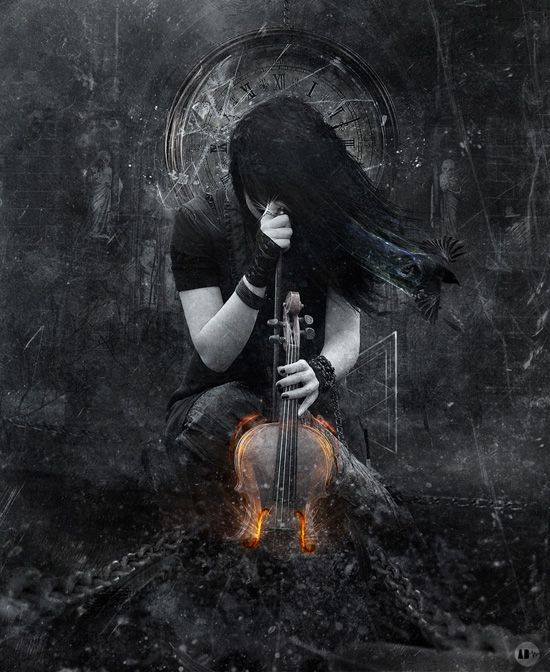 This entry was posted in Fantasy, Fiction, Monday Flash Fiction. Bookmark the permalink.

4 Responses to Something Tempting for Monday Flash Fics, May 29, 2017