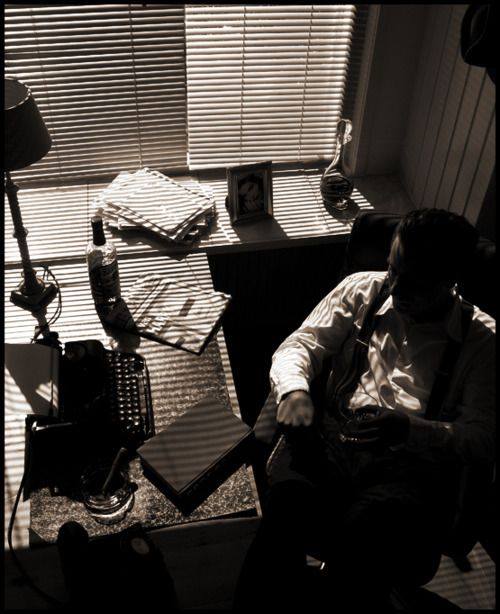 “First off, I’m not a private detective, I’m a lawyer.” Musselman said.

“Then why don’t you have a bigger office?” Mr. Wilford asked. “Honest-to God, when I first came in here I thought I’d walked into a closet by mistake.”

“It’s cheap.” Musselman said. That was pretty close to the truth. He and Pearce had actually flipped a coin to see whose name would go first on their firm and when the coin had fallen under a desk he’d had to angle himself so he could see whether it came up heads or tails.

“The half-empty vodka bottle is a nice touch.” Wilford said.

“Yeah, but that’s water. For the plant.” Musselman gestured at the potted green thing on top of one of the bookcases that lined the office.

Wilford set a green bottle with a faded brown label on the desk. “Take a look at this,” he said. “It’s what all the fuss is about.”

The bottle was long with a rounded base, full of dark, reddish liquid, looking very much like every wine bottle he’d ever seen, except for the label which was brown and brittle. He could barely make out a clock face, hands at five before midnight and the Roman numerals I, II, III and IV and so on. Beneath he could make out a date in smeared ink which started with “18” and a cursive signature that started with a capital “J” and trailed off into another smear.

“How old would you say that bottle is?” Wilford asked.

“Hmm…over a hundred years old, look at the 18.” Musselman said.

“If it’s real,” Wilford said. “This bottle has been in my family since about 1910.  It passed down to me but one of my cousins says he’s the direct descendent of the man who bought it at a sale.” Wilford sighed. “It’s supposed to be one of a batch from Thomas Jefferson’s cellars that was served at his Inauguration.”

Musselman let out a low whistle. “As a historical artifact, this bottle would be priceless. If it’s real,” he repeated. “And you have to be careful carrying something like that out in public.”

“Our ancestor who bought the bottle, or said he did, was a bit of a shyster from all I’ve gathered. We don’t really know if the story of his buying it at the sale was real,” Wilford said.

“I’d take the bottle to an appraiser, or maybe a vintner but I wouldn’t bother with a lawsuit,” said Musselman, who’d been staring at the bottle. “If I’m right, this bottle may not be over a hundred years old, certainly not two-hundred and sixteen.”

Wilford stared. Musselman pulled out a pen and drew on a notepad.

“This label shows a clock face with the numbers one through four in Roman numerals like this.” He had drawn IV on the notepad. “But clocks didn’t regularly use a Roman four like this one until long after Jefferson’s time. In 1801, it would have been depicted like this.”

“And as this label would doubtless been supervised by Jefferson if not actually drawn by him, I can’t imagine him not depicting a clock of the era accurately.” Musselman said. “After you’re sure, you can give your cousin the bottle if you want.”

“Good Lord!” Wilford said. “I can’t thank you enough if you’re right! What do I owe you?”

“Give me a call,” Musselman said. “We’ll work something out.” He leaned back in his chair and smiled. “Maybe enough for a nice bottle of wine.”