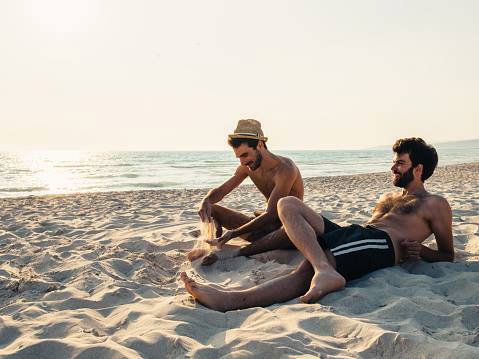 A Line in the Sand

“Okay,” Chad said, scrawling with his finger in the sand as they sat on the beach. “The coffee table’s here.”

“That doesn’t look like a coffee table,” Gary said.

“It’s rectangular, it’s in the living room, it’s a coffee table.” Chad said. “Now, we go in through here…”

“The back door. Don’t grin like that. I’ve got the key. They never got around to changing the lock on that one.” Chad said.

“Then what?” Gary asked.

“We check the fridge, see if there’s room,” Chad said, drawing a small square next to where he’d drawn the line to represent the back door.

“Ooooo! I love what you’ve done with the place!” Gary said, leaning over Chad for a better look.

“Shut up, you!” Chad said playfully hanging his hat on Gary’s face. The two of them laughed and Chad stretched out his leg and ploughed through his diagram in the sand.

“Awww, look!” Chad said. “I should have brought my tablet!”

“Okay, we’re giving your folks a surprise party, you don’t have to plan it like it’s the Normandy invasion,” Gary said.

Gary shut him up with a kiss.

“You plan too much!” Gary said when they pulled apart. “It’s what I get for marrying an Army Ranger.”

“Yeah,” Chad said, kissing him again. “Think my folks will be surprised with this anniversary party tomorrow?”

This entry was posted in Fiction, Monday Flash Fiction, Uncategorized. Bookmark the permalink.