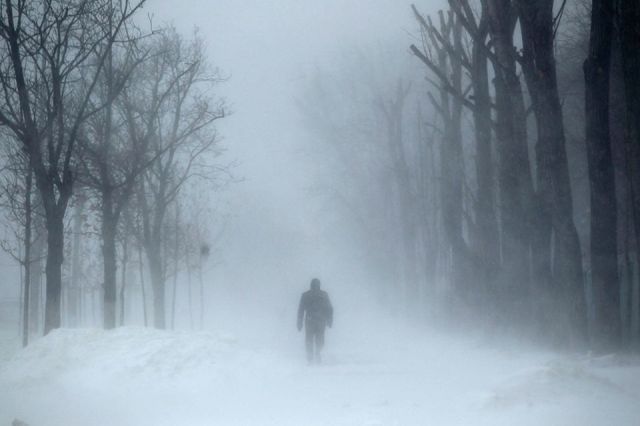 Steve ran in and slammed the door shut behind him before we could yell at him to stop letting in the cold. The blizzard had hit right before noon and the College had already cancelled classes. Steve must have walked from the school cafeteria where he worked the lunch shift, back to our frat house. He looked like he’d been body surfing in Antarctica.

Johnny B. sat on the couch by the unlit fireplace (we had a furnace); Kevin looked up from the trig textbook he was studying. We all stared.

“Well, if you don’t believe me, look!” Steve said, pointing at the front window.

I Study Nada, as we called ourselves, was in an old brick building that had been a girl’s dorm in the 1950’s. Two stories, bathrooms on each floor, storm windows and our charter were up-to-date.  The closest to a wild party any of us had held involved a movie night where we lost one of the library’s DVD’s. As stereotypical fraternities go, we were pretty placid. Until that afternoon when we crowded around the front window and saw a dark figure walking down the tree-lined street in the blowing snow.

“That’s not a shadow, that’s somebody,” Johnny B. said.

“Anybody would look like a shadow out there,” Kevin said, making a spooky “oooooooo” noise.

On the floor, in the light from the lamp over the table, I could clearly see our shadows. Mine, Kevin’s and Johnny B.’s. But not Steve’s. I moved the lamp. Nope. No shadow.

“How did that thing get loose?” Johnny B. asked.

“I dunno,” Steve said. “I was walking through the back hallway, under all those lights, and all of a sudden my shadow started bouncing around the wall and waving its arms at me. I grabbed my hoodie and ran. Hey, could you guys turn up the heat or something?”

I was staring out the window again; the shadow or whatever it was had been obscured in a blast of swirling snow.

“I’m going to my room and curl up under some blankets,” Steve said. “I’m still cold.”

About a half hour later I went upstairs to get something from my room and I noticed Steve’s door (which was across the hall from mine) was open. I peeked in, his desk light was on and he was asleep in bed, blankets pulled around him. And standing at the end of the bed was his shadow.

It spoke, in a deep, shadowy voice, like when you try to talk underwater.

“We are not whole apart,” it said. “I am lost without you. And you are always warmer with your shadow.”

It was gone in an instant, but the shadow of Steve in his bed suddenly stretched across the floor. In his sleep, Steve smiled and rolled over.

I shut the door quietly and went back downstairs.

This entry was posted in I Study Nada, Uncategorized. Bookmark the permalink.