Something to end the year with! Happy New Year!

At The Stroke of Midnight

“Let us stay up! Pleeeeeeease?”

“Yeah, but I’m twenty and I have to study,” Billy said, holding up a textbook. “Besides, there’s nothing really to see. New Year’s Eve is just another night.”

“The old man isn’t the new year, at least not anymore. The little baby is the New Year.”

“Not mine,” Billy said with a grin.  “Well they say that if you watch really close at the stroke of midnight, you can see an old man leaving the room and a little baby walking in. Now, bedtime for you two.”

“Awwwwwwww!” they said in unison.

“Tell you what; if you head off to bed right now I promise I’ll wake you up around midnight, okay?”

“Okay,” they said a little glumly as they walked off to their bedroom.

“Nite-night guys,” Billy called after them. “Oh, and no texting in there or I’ll let you sleep through the New Year.”

Billy checked the fridge. Lunchmeat and one bottle of beer, way in the back. Good. He’d save the beer for after midnight. He made a sandwich and plopped down on the living room couch, munching on the sandwich as he opened the textbook and started to read, keeping an ear out for sounds from his nephew’s bedroom. He caught himself dozing a couple of times and thought about turning on the T.V. Finally he set the book down and stretched out on the couch and closed his eyes.

Billy woke to the sound of fireworks popping outside. He checked his cellphone; not quite midnight, yet. He stood up and looked around. The room was dark; he only had the light by the couch on.

And then there was something moving in the shadows of the room.

Billy froze. The figure in the corner was tall and wearing what looked like a tattered bathrobe with a hood. Something glinted in the figure’s hands; a sharp, metal blade at the end of a curved pole. Billy realized what he was seeing; someone dressed up as Old Man New Year. He could just make out a banner wrapped around the figure with the year written on it, the last number trailing into a smudge. Billy could barely make out a large, dark hourglass hanging from the figure’s belt.

But how had he gotten in here? Then the figure stepped into the light. Its arms were almost skeletal and its face was frozen in an open-mouthed expression, skin withered making the head look like one of those dolls with the head carved out of an apple. This was the face when the apple went bad. And as Billy noticed the figure’s cheek twitching, he realized it was no mask.

The figure advanced on Billy and raised its scythe. Billy backed up, stumbled over the edge of the couch and fell on the floor as the figure swung its scythe point down at Billy, who closed his eyes and choked on a scream. Nothing happened. After a moment, Billy opened his eyes. The figure and his scythe were gone. Billy could hear the popping of fireworks in the distance. He checked the time; 12:00 midnight. He could hear his nephews stirring in their bedroom. He headed to the fridge, he needed that beer.

And then, from farther off than the fireworks, he heard a baby’s cry…

Author’s note: The Billy Gonzalez stories (There are about three by my last count) owe a lot to L. Sprague De Camp’s stories about Willy Newberry, who likewise got involved in the spooky and weird. 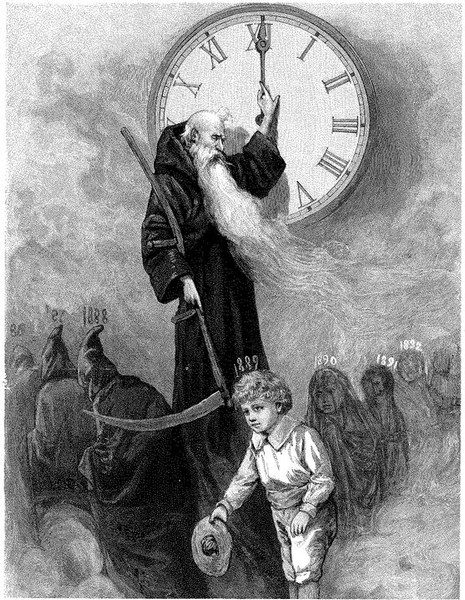