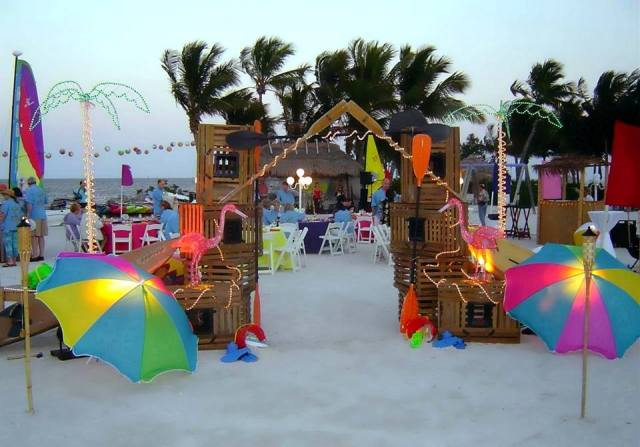 The Creature of Wine Cooler Cove

I was having a beer in Demeter’s Bar when Marty started telling me about the sea serpent. He was sitting on the barstool next to me, and I thought for the umpteenth time I should stop sitting at the bar and stick with the back booth.

It was about five years ago (Marty said) I was still with my ex-boyfriend Alex, and there was this big party on the beach near where we were living. Lights, surf music, a big archway like you were entering Wine Cooler World or something. We were standing around, drinks in hand, checking out the buff young guys in swim trunks. Then I looked out on the water and saw a lumpy green thing surface. I thought it was a log until it opened its eyes. I’d never seen a sea monster before, but it was in the sea and kind of green and monstery so that was probably what it was.  I nudged Alex and pointed (with the hand that was holding the wine cooler) and said “Hey, look at that?”

“That big green thing in the water out there,” I said.

That was when the tire blinked. Alex stared. He finished his wine cooler and grabbed another from the big ice bucket.

“Did you ever hear the theory that a lot of dinosaurs never went extinct?” Alex said.

I admitted I hadn’t.

“A lot of them were underwater creatures to begin with and when the world changed they just stayed near the sea bottom. But there are exceptions.” He sipped some of his wine cooler. “You’ve heard of the Loch Ness Monster? It’s really a Pliosaur.”

Maybe I was drunk but this was making an awful lot of sense. That thing did look like a sea monster and I wondered if it was here because it was tired of fish. Maybe the tanned  gymbunnies at the party looked as yummy to it as they did to me. As if in answer, the thing’s head began to rise out of the water. It was huge and so far we were the only ones who noticed it.

I handed Alex my drink and I rushed over to the snack table and grabbing what I wanted I quickly hurled it over the heads of the partiers to the thing in the sea. Its eyes followed what I’d thrown and its mouth opened and snapped shut with the meaty missile in its jaws. It sat there for a moment, shook its head and sank back under the water. I could’ve sworn I heard a bellow which was drowned out as the music cranked up. Alex and I watched a shadowy, huge shape head out to sea. Then we cut out and left the party early.

“What did you throw at that sea monster?” I asked. “And how did you throw something that far anyway?” Not that I was ready to believe him, but he had me curious.

“Oh, I grabbed a hot wing and dunked it in the homemade extra-extra hot sauce they had. Wish I had the recipe, might make a good monster repellant. As for how I threw it so far,” he grinned and flexed his hand. “I was a pitcher in college.”

I caught the bartender’s eye, he bit his tongue.

“And that,” Marty said, oblivious to the bartender’s grin, “is why I stay away from beaches. All those shark attacks you hear about? They probably aren’t all sharks.”